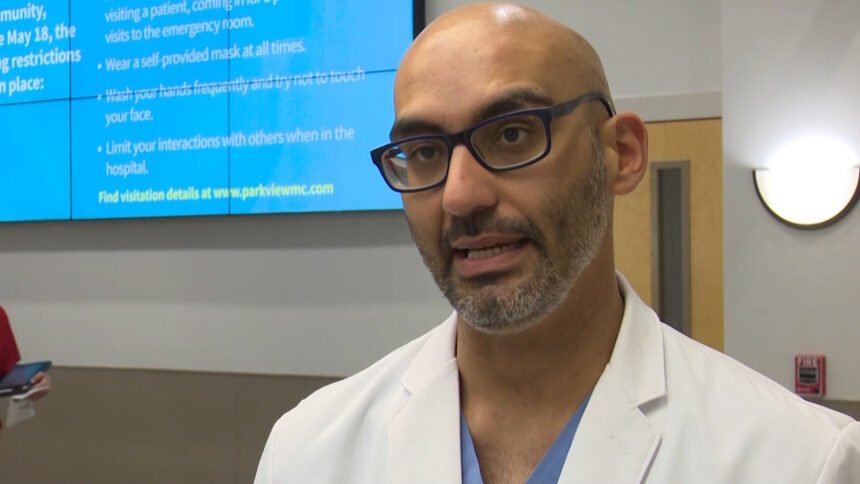 PUEBLO, Colo. (KRDO) -- On Tuesday, at a press conference to announce Colorado's new COVID-19 restrictions dial, Governor Jared Polis warned people of the need to lessen the strain on the state's health care system. He used Parkview Medical Center in Pueblo as an example.

"Parkview Hospital in Pueblo reached more than 100% capacity (Monday)," said Governor Polis. "100 COVID patients and multiple patients were transferred to other facilities. There is room for them still. But with the experience of Parkview that so many others are facing, there are only so many beds in the system."

For Parkview Medical Center's Chief Medical Doctor Sadeep Vijan, the Governor's comments aren't necessarily what they want to be known for.

On Monday, Parkview Medical Center did pass their capacity threshold, but protocol kicked in and 10 ER patients were transferred to UCHealth in Colorado Springs.

Dr. Vijan says over the last several weeks, Parkview has been running somewhere between 92% and 99% capacity.

"People need to understand we get full then we get discharges or transfers and we have the capacity to take on more," said Dr. Vijan.

Parkview Medical Center's spokesperson says right now beds are tight, but they are still admitting new COVID-19 patients from a community where the numbers are surging rapidly. According to data compiled by the New York Times, Pueblo and Pueblo County is one of the worst areas in the country when it comes to new COVID-19 cases in the last week.

Dr. Vijan sees this study reflected in his hospital.

"It's all percentages," said Dr. Vijan. "The more people that test positive we can expect to see that swarm on our services, and that has been playing out by the book over the past two weeks.

The hospital is already working on backup plans for a number of potential future problems -- such as overcrowding at the hospital's morgue.

Currently, Parkview's morgue has 5 dead inside, and has a capacity of 12. If they need the extra space, Parkview says Brian Cotter, the Pueblo County Coroner, has agreed to house the deceased in the county's morgue.