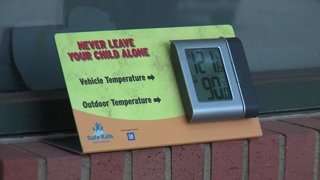 COLORADO SPRINGS, Colo. (KRDO) -- As temperatures continue to rise this summer - it's more important than ever to make sure you're never leaving your child in a car unattended.

Officials at Drive Smart Colorado say that on average, 40 children die from over-heating in cars each year -- 75% of those children are under the age of two.

Five kids in the U.S. have already died this year from being left in a hot car. Experts say in most cases, parents forget they are there entirely.

But it's not just parents who are forgetful.

"Oftentimes, it's the other person -- the other person who doesn't take the child to daycare or to school, but today they're doing it as a favor," says Maile Gray, Executive Director of Drive Smart Colorado. "Sometimes it's that break in routine that can cause the tragedy to happen."

Experts suggest using the "shoe trick" as a reminder that your child is in the backseat.

Simply take off your shoe and put it next to your child's car seat before you start driving. This way, you'll be forced to look into your backseat when you arrive at your destination.

However, forgetfulness isn't the only thing that causes children to die in hot cars.

Of the 40 kids who die in hot cars each year, on average, a quarter of them died because their parents failed to lock their car doors when they got home.

When those parents weren't paying attention, their kids got inside of the cars, got stuck or fell asleep, and overheated inside.

Experts say parents need to be vigilant about locking their car doors, even when they're in the garage, to prevent this from happening.

Sam Cole, with the Colorado Department of Transportation, says over the past 28 years, eight children have died in hot cars in Colorado.

It doesn't take a lot for a car to overheat, either.

Cole says in a matter of 10 minutes, a car's internal temperature can rise up to 20 degrees. This means even on a 60-degree day, a car can get up to 80 degrees inside very quickly.

Heat is also a lot harder on children. Cole says most kids heat up three to five times faster than adults.