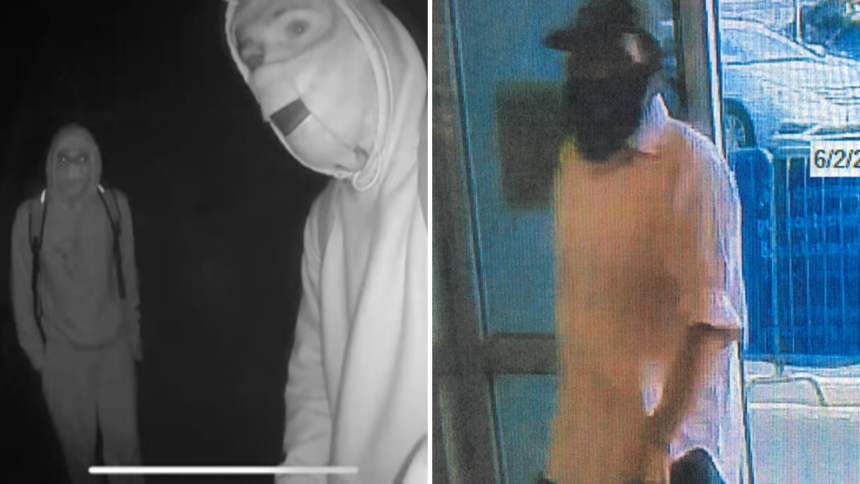 On May 22nd, police say two men approached a house in the Blackfoot Trail neighborhood with what appears to be an "an AR-15 style rifle."

The surveillance video shows the two suspects approaching a home. The first suspect opens the storm door and it appears they try and unlock the home's main entry. Meanwhile, the second suspect hangs back with a gun strapped on his chest.

Police say the homeowner was able to scare the suspects away.

An officer attempted to contact the suspect but the two ran away before the officer could catch up to them.

If you have any information, call Commander Andrew Leibbrand with Woodland Park police at (719) 686- 2505.

Manitou Springs Police are looking for a man accused of getting into an unlocked car and getting away with several credit cards.

On June 7th, between midnight and 7:00 a.m., police believe a male suspect entered the vehicle, stealing five credit cards and later purchased over $1500 dollars worth of items at the Walmart on 8th Street in Colorado Springs, convenient store on South Tejon, and BestBuy.com.

Police describe the suspect as a white male, with average weight and height with brown hair. He was wearing a green baseball cap, a black facemask, a pink button-up shirt, with blue jeans and black shoes.

The suspect is believed to have gotten away in a white Nissan Titan pickup truck with a blue and green tarp located in the bed of the truck.

If you have any information, email Manitou Springs Police Officer Dacona Coombs at dcoombs@comsgov.com or call their dispatch number at 719-390-5555.