Described as a “ripped from the headlines” movie, Lifetime’s “The College Admissions Scandal” is “inspired by” the Varsity Blues cheating and bribery story, which gets at the truth of the issues in occasionally heavy-handed but overall, kind of delicious fashion.

Eschewing any of the big names associated with the case, the movie focuses on a fictional pair of wealthy mothers intended to serve as surrogates for them, each of whom is at her wit’s end over getting their children into elite universities.

Caroline (Penelope Ann Miller), an interior designer, is guided along her path to the dark side by Bethany (Mia Kirshner), a partner in an financial services firm who, unlike Caroline, has no compunctions about bending the rules — and then outright breaking them — in order to do what she deems necessary for her kid.

“I might have found us a savior,” Bethany says.

So it’s Bethany who introduces Caroline to Rick Singer (Michael Shanks, oozing sleaze), a “college admissions consultant” who starts out by counseling kids to crack the books, before suggesting more elaborate schemes — including the “side door” entrance via athletic programs, by paying off college coaches and administrators — that reel in big-money payments from parents.

There are, admittedly, some hilariously campy moments in the early going, such as when Caroline reports that her son’s SAT scores are in the “high 12s,” producing the sort of pained expressions among her wealthy friends normally associated with pharmaceutical ads.

The story really unfolds in two phases, first charting the logistics of the scheme and the FBI stumbling upon it via a separation investigation, and then the downfall — and humiliation — experienced by those who benefited from it.

Obviously, this is a bit of a hasty cut-and-paste job. Yet at its best, the movie effectively illustrates the cynical calculus that these parents made, as well as the rationalizations employed to justify their actions. It’s no worse, Caroline tells her skeptical husband, than above-board donations for a building or a library, while they repeat time and again what a huge difference attending the right school will make in their children’s lives.

Granted, those who tune in hoping for some tidbit about the most famous names caught up in the scandal — actresses Felicity Huffman and Lori Loughlin among them — won’t find them here.

Still, as the closing crawl reminds us, the tentacles of the Varsity Blues operation reached far and wide, executed in a manner that should make any parent or kid who has sweated out waiting for college acceptance notices irritated or downright angry.

“The College Admissions Scandal” is the kind of modest, quick-turnaround effort that won’t win any prizes; still, in terms of shining a light on that part of the story, it scores a passing grade the old-fashioned way: By earning it.

“The College Admissions Scandal” airs Oct. 12 at 8 p.m. on Lifetime. 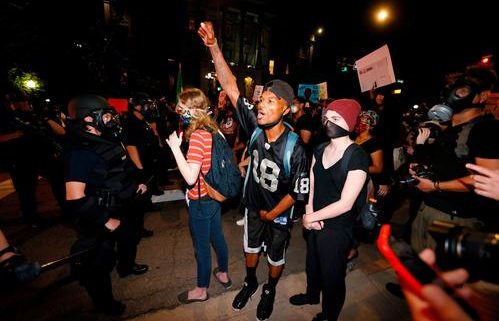