In 2021, KRDO reported the number of YMCA of the Pikes Peak Region lifeguards was down 50 percent.

This year, the situation has improved, but the YMCA says they're still only at about 60 percent of their full hiring capacity.

Around a third, to nearly half of the nation’s more than 300,000 pools will likely be affected in the summer of 2022, according to an estimate by the American Lifeguard Association.

The YMCA says a consequence of that shortage is shortening hours at local pools.

"With it being summer and summer being so limited, we've really prioritized our outdoor pools and making sure that we can provide that fun, safe environment at our outdoor facilities," said Murphy Barry, Association Director of Aquatics for the YMCA of the Pikes Peak Region. "But, there has been a cutback at all of our indoor facilities, and that's been really tough on some of our members who utilize only the indoor facilities. We've seen hours change at all indoor facilities. But luckily this summer, we haven't had to make any changes outdoors as of right now."

The YMCA believes many factors are exacerbating the shortage.

"I think pre-pandemic more people were thinking about summer jobs sooner in the year," said Barry. "After the pandemic, people are more worried about school and thinking about finishing out prom, graduations, and all of those types of things before they worry about their summer job. I think that is impacting the delay a little bit."

Another component: the Y was unable to hire any lifeguards in the summer of 2020.

They're now missing a couple of classes of younger lifeguards that would have returned to work at the YMCA for multiple summers before going to college.

"In normal summers, we would always hire 100, 150 lifeguards each summer," said Barry. "in 2020, we didn't hire anyone. We retained all of our staff that have stayed with us through the pandemic because we were operating at such minimal hours and capacity. That's all we needed. But we lost out on 150 staff members that we would have normally hired at that time, so the retention isn't there as much."

While reducing hours at pools isn't ideal, Barry says it's necessary to make sure all guests have a safe experience at the YMCA.

"Our number one priority is making sure that everyone has a safe and fun summer," said Barry. "The only way we can do that is if we have the proper staffing. "It's not because we don't want to open up more facilities, and we don't want to offer more hours. We have really strict ratios that we have to follow to keep people safe."

Though it's already June, the YMCA says it's not too late to apply to become a lifeguard or work elsewhere at one of their facilities.

"We are still hiring across our association," said Barry. "We have outdoor pools, we have indoor pools. We have small pools, we have fun pools. It's absolutely not too late. All of our jobs are posted on the Pikes Peak YMCA page. We have three different lifeguard postings and we have different locations association-wide, so they're tailored to which location anyone wants."

While many think lifeguarding is only reserved for high school students, the YMCA says they're casting a wide net and encouraging everyone with the time to apply, even retirees.

"We shoot for all ages," said Barry. "Swimming and aquatics is a lifelong experience. We've had a lot of members who have seen our shortage and have asked, 'What does it take to be a lifeguard?' 'Can I become a lifeguard?' So we do have some of the older generations that has joined our teams. It's such a great value to our teams, and brings diversity to those teams."

Not all aquatics centers are suffering equally.

Pueblo Parks and Recreation says they are fortunate this year to be fully staffed for their aquatics department, including lifeguards.

If you're interested in applying to be a lifeguard with the YMCA of the Pikes Peak Region, click here. 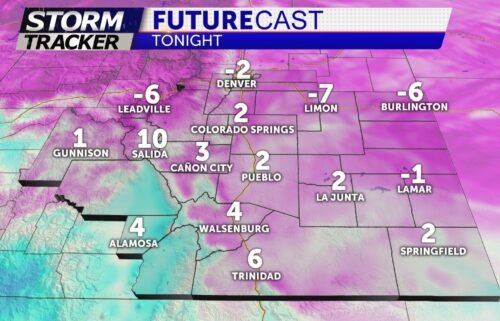