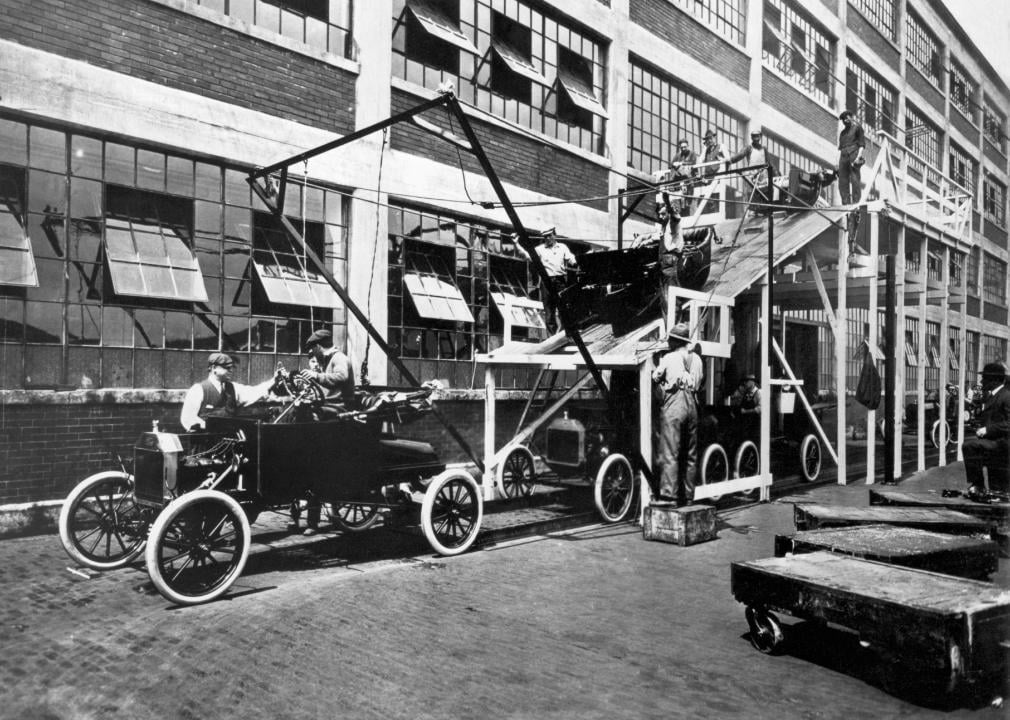 Supply chain issues have been dominant in the news in 2021. Major issues with the timely delivery of parts across the world have spelled trouble for a number of industries, and the auto industry is no exception.

Auto supply shortages are the result of a number of factors, including shortages of semiconductor chips and other necessary car parts. But this is far from the first time external factors and events have created trouble for the auto industry. Indeed, since the auto industry found its footing with the development and sale of consumer vehicles in the 1910s, events like wars and labor strikes have impacted the industry’s ability to produce and deliver cars for consumers. In some cases, the development of new techniques and management styles has increased efficiency and reduced waste with auto manufacturers in some cases and caused plants to shut down in others.

CoPilot researched seven auto supply shortage events that happened in car history, using information from news articles and historical journals. Read on to understand how the history of the auto industry is connected to history more broadly. 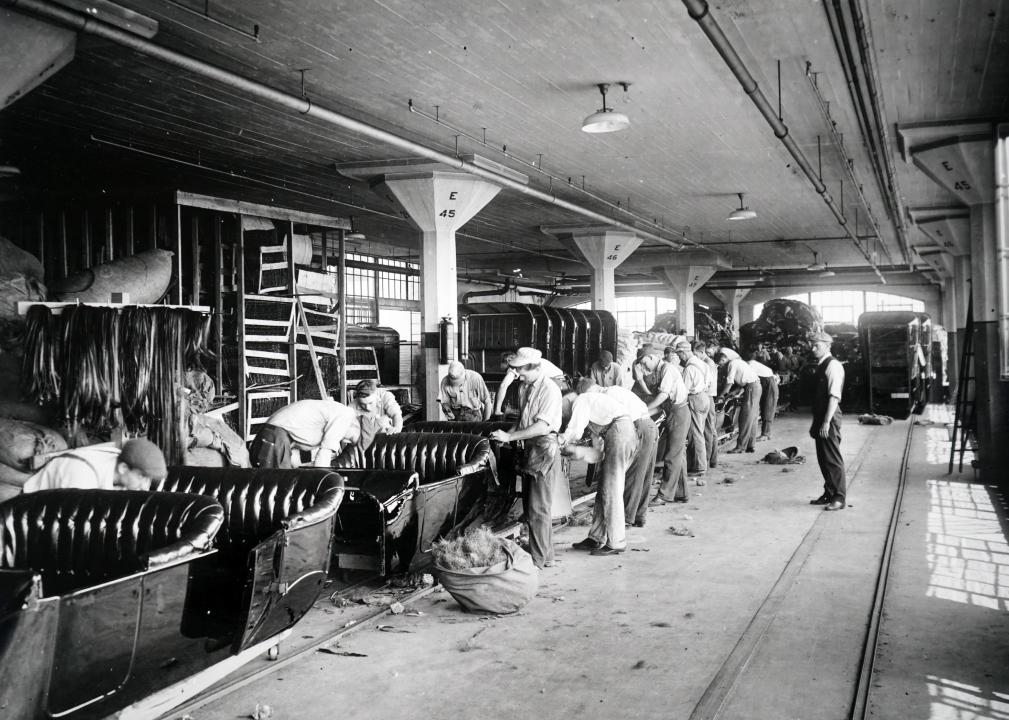 In the 1910s, auto manufacturing plants in Detroit sought to hire European immigrants to work in the factories. Detroit was one of the major manufacturing hubs for cars in the 20th century.

Ford primarily hired for “unskilled” labor to work in the factories, and by 1914, 71% of Ford’s manufacturing workers were immigrants, who earned less than their American-born neighbors in Detroit. This created a divide among working-class Americans, elevating the status of English-speaking Americans while immigrants were expected to perform “unskilled,” blue-collar work. Henry Ford said of his workers in the 1910s: “The most wretched class was composed of foreign workmen, ignorant, and unskilled labor, most of them unable to speak English.”

Recruitment officers were sent to Ellis Island—an immigration hub into the United States—to recruit foreign-born workers to their factories. Polish and Italian immigrants, in particular, entered car factories in record numbers. During this same time, Detroit saw an influx of Black Americans, some looking to work in the auto industry, but Ford still primarily relied on immigrant labor. 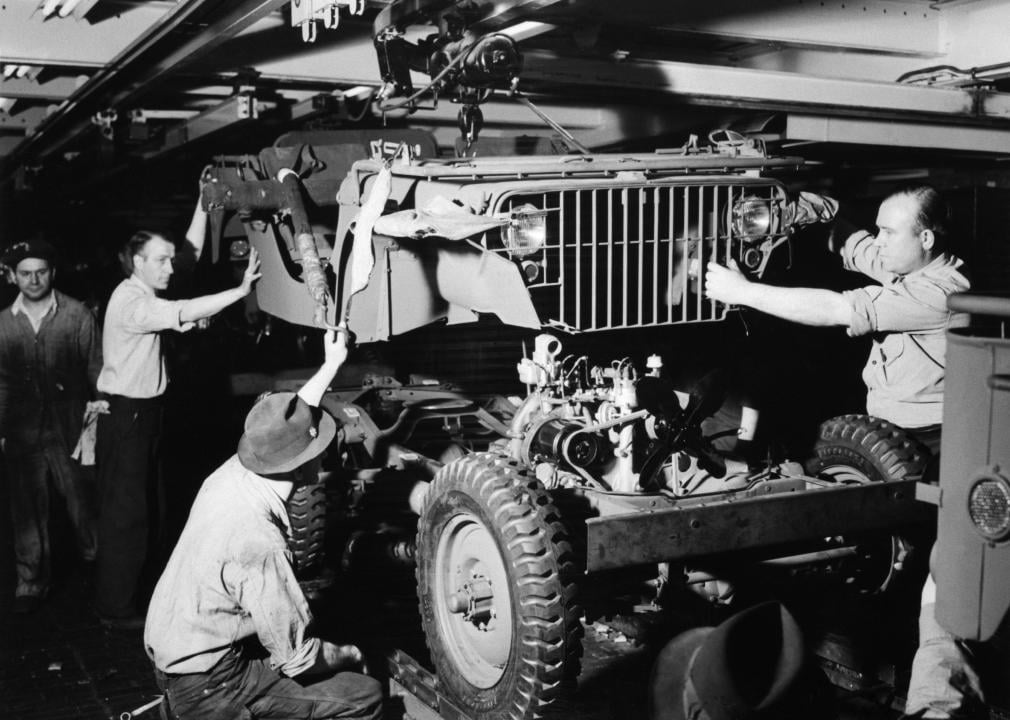 During World War II, Franklin D. Roosevelt established the War Production Board in 1942. The board regulated the production of materials that might be used for war. This included automobiles and fuel. The war, therefore, halted the production of new cars in the United States. The existing stockpile at the time the proclamation was issued was just over 500,000 cars. These cars were rationed out to dealers and then customers throughout the duration of the war. 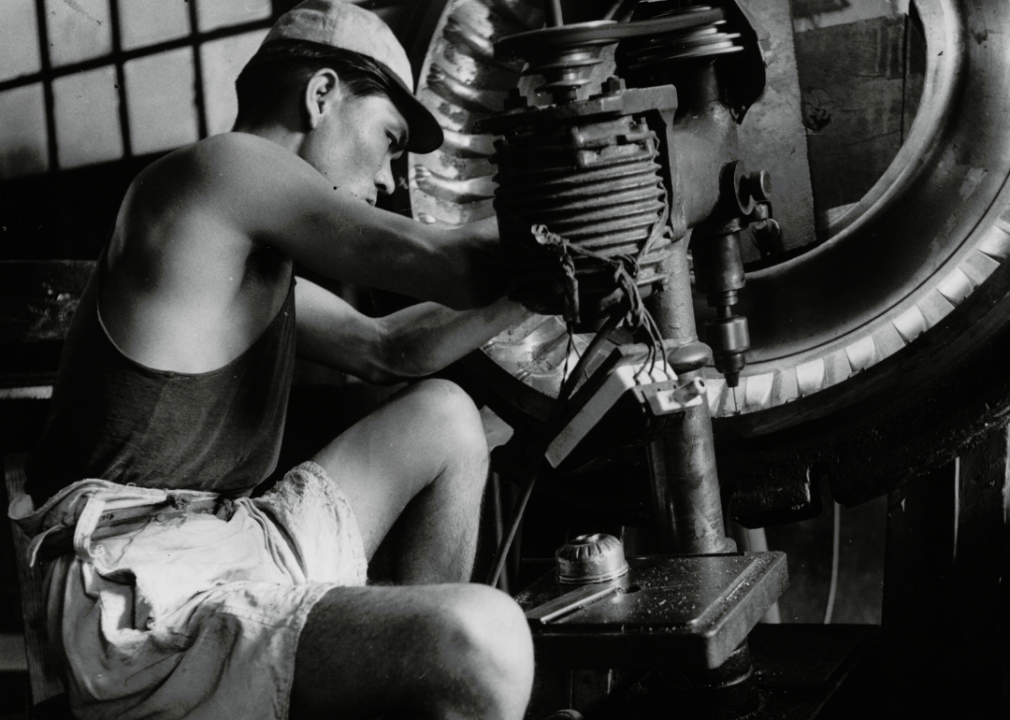 In the 1950s, Japanese automakers at Toyota invented the concept of “just-in-time” manufacturing to reduce waste and increase efficiency. This was particularly important in Japan, where post-war austerity impacted the capacities of consumers and factories alike. To improve production capabilities without raising costs, several basic tenets were implemented. The first was eliminating waste, which was defined as anything that did not benefit the consumer. The second was to not stockpile parts required to make cars until right before they were needed, meaning the company did not need to spend excess capital. This allowed Japanese automakers to compete with American manufacturers despite having disadvantages in their larger economy. While this gave Toyota a competitive edge, this method can lead to inconsistent work for auto employees. The just-in-time method has since been adopted elsewhere around the world, the U.S. included, which has led to a dependence on independent contractors and temporary work agreements. In the U.S., this disqualifies employees from benefits such as paid time off and health insurance. 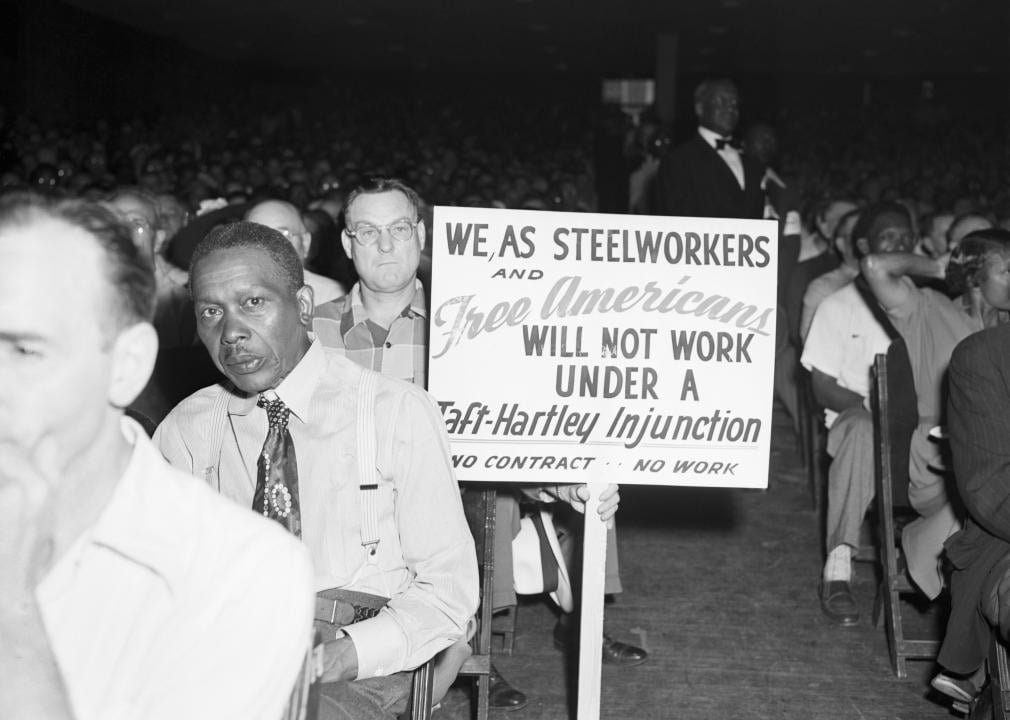 During the Korean War, President Harry Truman enacted price controls on various wartime industries. This included steel and labor, with wage increases being limited. Steel unions in particular were upset with the cap on their earnings. As such, steel union workers went on strike in 1952, which limited the production of automobiles along with other goods. The strike made it all the way to the Supreme Court, with President Truman issuing an executive order to break the strike, and steelworkers suing, claiming that the executive order was unconstitutional. The Supreme Court determined the president cannot seize private companies and convert them to public. Workers then struck for 53 days, leading to a wage increase and settling on terms proposed by the union several months prior. 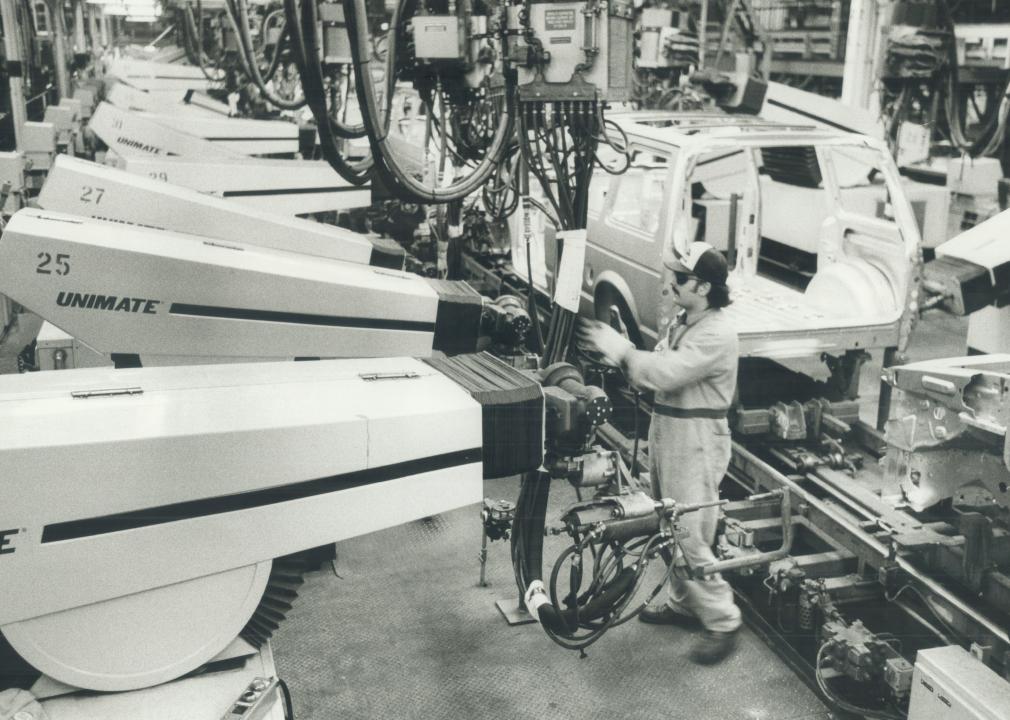 A shortage of multiple types of auto parts contributed to an auto shortage in 1984. The problems were exacerbated by plant shutdowns. General Motors, for example, shut its entire plant down for two weeks due to a lack of “quality parts.”  Some of these issues were caused by plants switching to a new production model. Workers for General Motors in the U.S. and Canada also struck, closing down several key plants. Unionized General Motors employees  sought better job security as their highest priority, following the company outsourcing production and massive layoffs during the 1980–82 recession. Borrowing from the success of the Japanese “just-in-time” model, many American factories adopted the model, which eliminated the need for storage. In turn, this new model proved precarious for workers, diminishing job security for employees who were needed on a less consistent basis. 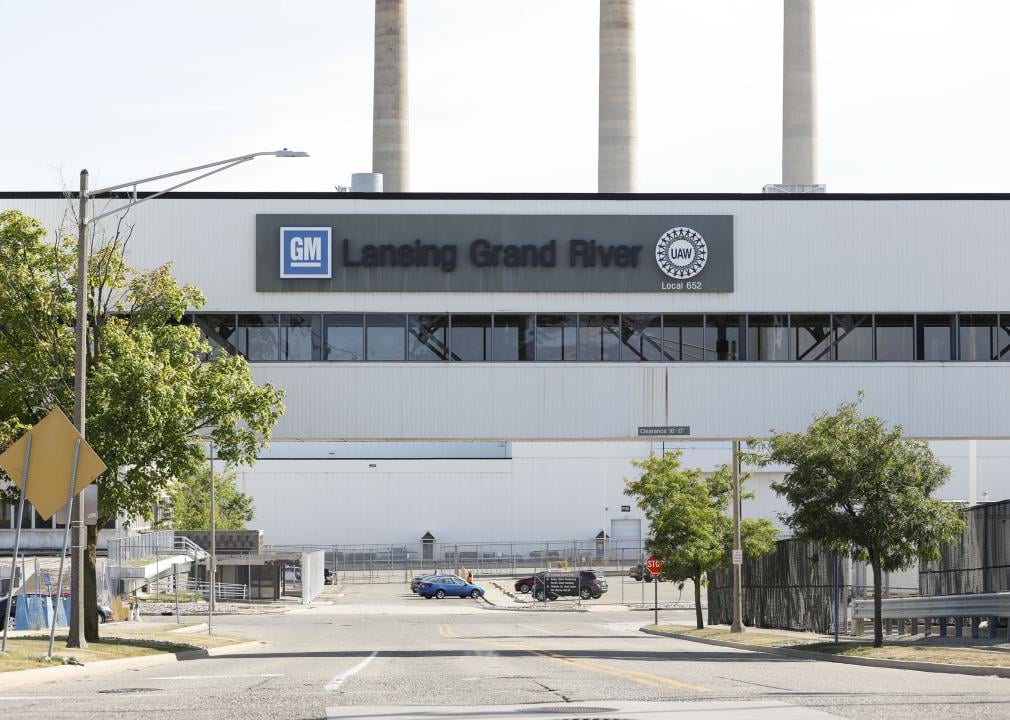 Silicon is a primary ingredient in semiconductor chips. Semiconductor chips are used in a vast array of technology, including cars. A major silicon shortage is crippling the chip industry, which is, in turn, hurting auto production. Raw materials for chips, including silicon, are often shipped from Japan and Mexico and made in Taiwan and China. The COVID-19 pandemic shut plants down across the world while the demand for chips increased with the emergence of remote working and learning. 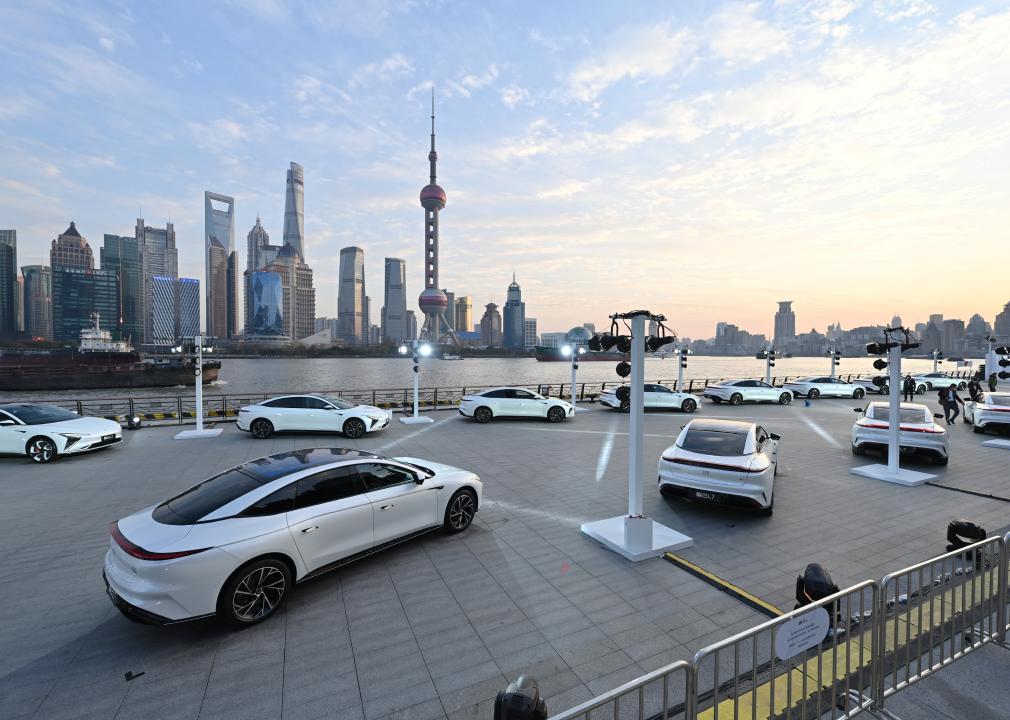 Looking ahead: Nickel shortage expected to cause trouble for EVs

Electric cars are becoming increasingly common. Electric cars require nickel to produce their batteries, and experts are warning that a nickel shortage could slow the production of electric vehicles by 2026. If demand for nickel continues this way, prices for the material could rise. This could lead to the price of electric cars rising by at least several thousand dollars. In turn, this might suppress demand for electric vehicles, as fewer consumers could afford them.

This story originally appeared on CoPilot
and was produced and distributed in partnership with Stacker Studio. 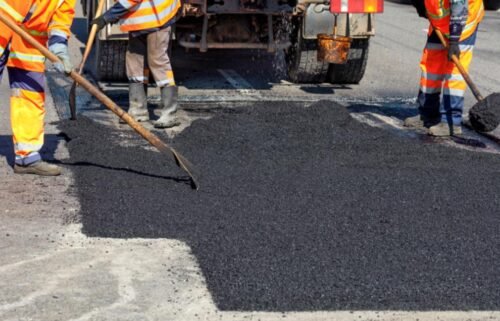 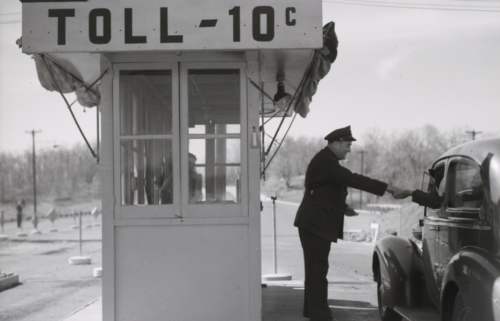 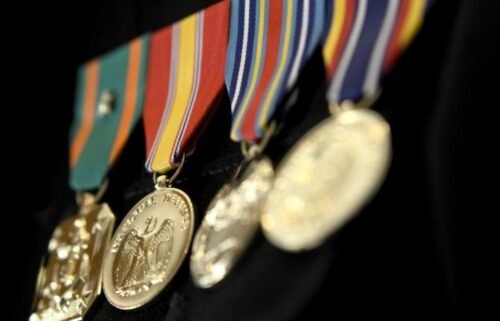 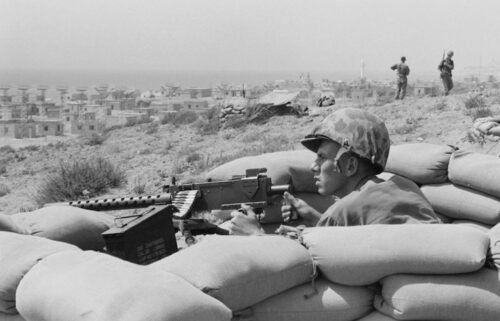