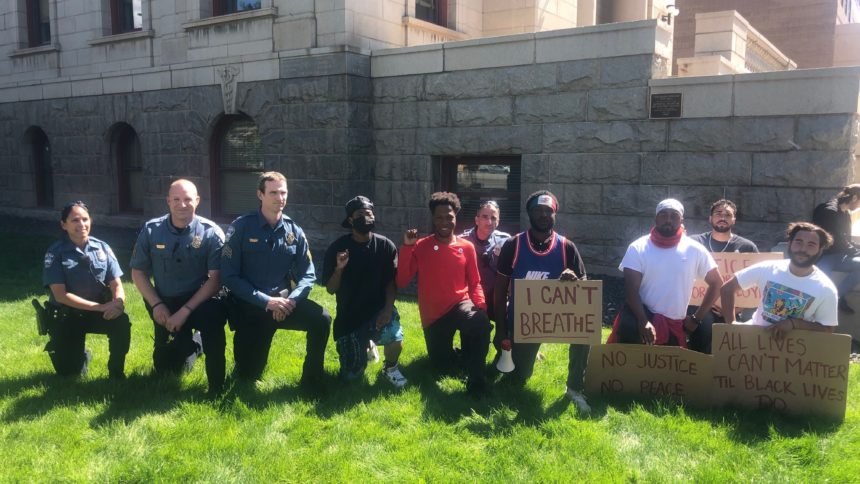 COLORADO SPRINGS, Colo. (KRDO) -- After a raucous weekend that saw peaceful protests and some that took violent turns at times, organizers in downtown Colorado Springs said their intention Monday morning was to demonstrate safely in support of reforms after the death of George Floyd.

To that point, at least three CSPD officers joined the protesters in solidarity, taking a knee just outside of City Hall Monday morning.

"That's my main goal is that we get people's stories for the world to see, that it is everywhere," Larry Black told KRDO. "We're just tired of unjust killing and unjust deaths."

"We wanted to make sure we came out here today to make sure they know we truly do care," said one CSPD officer. "I get a little emotional because it means so much to me that people see who we are behind the badge. We really do love this community."

The protests remained non-confrontational as the group moved through downtown toward the police operations center, which was a different scene from the weekend. On Saturday, several people threw rocks through windows and vandalized areas downtown -- police responded with orders to disperse and used tear gas.

Tear gas was used during the #GeorgeFloydProtests in Colorado Springs. The protestors have moved back. Warning: explicit language. pic.twitter.com/ERFhd2G6Ba

The protests on Sunday were more calm, though demonstrators lingered outside of the police operations center until late into the night.

"We just want everyone to know we can get this done peacefully; the officers are also willing to do this peacefully," said Ashton Doss, one of the protesters in attendance Monday.