Everything Fatima Um Ali needs to protect herself and her family from the novel coronavirus is out of reach. There is no running water, soap is expensive and hand sanitizer is an unaffordable luxury. She cannot even imagine what social distancing for her family of 16 would look like in the three tents they share in a makeshift camp near the Turkish-Syrian border.

“We try with our limited capabilities to keep clean. All those sanitizers, cleaning materials that you are talking about, we can’t get,” Um Ali tells CNN.

She lives in one of the many camps that have cropped up in the fields, olive groves, and rolling hills of Syria’s rebel-held Idlib province. Most of the children have runny noses from exposure to harsh living conditions.

The family has dodged death multiple times over the course of the ongoing nine-year conflict in Syria. They fled a regime assault in Hama province when the war began in 2011, moving from one town to the next as the fighting dragged on.

But they can’t run away from the global pandemic. COVID-19 is heading toward the war-ravaged province like a “slow moving tsunami,” the World Health Organization says, and could claim tens of thousands of lives.

Idlib’s population of 3 million, already buckling under extreme shortages of medicine, is considered to be one of the world’s most defenseless against the virus.

Medical facilities in Idlib have been decimated in targeted airstrikes over the years. Doctors are already overstretched and hospital beds are in short supply. A brutal Syrian government offensive — propped up by Russia and Iran — that was launched in December added more pressure on the flailing healthcare facilities. The latest string of attacks also displaced nearly 1 million people, cramming the growing influx of families into sprawling camps with no infrastructure and increasingly unsanitary conditions.

“We don’t know if we have the coronavirus yet, but we are expecting a tsunami with a high death toll because of the lack of medical infrastructure,” he says.

Medics are raising awareness about hygiene requirements, but it’s a hard sell for a population reeling from the effects of war. “They have been through bombs, freezing to death, chemical attacks, so they are already resigned to death,” Khalil said.

Idlib has only 1.4 doctors per 10,000 people, according to the IHD. Hospitals are already running at over-capacity, with an average 150% occupancy rate, according to the IHD. There are only around 100 adult ventilators in opposition-held parts of Syria, which includes Idlib and sections of the countryside of nearby provinces, and fewer than 200 ICU beds.

When COVID-19 spreads through the rebel enclave, more than 100,000 people could die, according to Khalil.

The Early Warning and Alert Response Network (EWARN), the only disease surveillance group operating in this part of Syria, says that between 40 and 70% of the population could get infected, based on global transmission rates.

According to those estimates, at least 1.2 million people in Idlib could contract COVID19, explains Dr. Naser Mhawish, the surveillance coordinator of EWARN.

Testing for the coronavirus, another key component of the battle against the spread of the pandemic, has been slow to start.

In all of opposition-held Syria, only one doctor and one device can carry out tests for the virus. After weeks of waiting, 300 tests privately purchased by EWARN from a Turkish manufacturer arrived at the Idlib Central Hospital’s laboratory on Wednesday. So far, they have tested four suspected cases — all turned out negative.

The World Health Organization has said that it will also deliver some testing kits to opposition-held Syria. So far, these have not arrived, according to medical professionals in the enclave.

The organization has come under criticism for its slow response to the possibility of the pandemic hitting opposition-held areas, while making a delivery of the tests to Damascus.

“Corona(virus) and after corona(virus) — the suffering in this area will continue and nobody will do what they have to do to stop this catastrophe,” Khalil says. “In general we think that the WHO and some donors they don’t care a lot about this area.”

“The delay in supplying test kits to northwest Syria does not imply any favoring of one side of the conflict over the other, as some may choose to interpret it,” Brennan says.

“We are busting our guts to make sure everything is ready,” he says.

Even in government-controlled parts of Syria, capacity for testing remains low. The country has reported only five confirmed cases, but experts expect a bigger spread.

Damascus has received 1,200 testing kits from the WHO. According to the organization’s Damascus representative, Dr. Nima Saeed Abid, 300 of these were used.

All of Syria is considered by the WHO to be a very high risk country in the event of the pandemic’s outbreak.  It has the largest population of internally displaced people in the world and its war has dealt a major blow to its health sector.

The White Helmets rescue group, officially known as Syria Civil Defense, are once again on the frontlines. Accustomed to pulling people from rubble as airstrikes pummel towns, the rescuers are now trying on hazmat suits.

“This pandemic is making my mind busy all the time, our work has been changed now and this is something that we are not used to do,” says Laith Abdullah, a White Helmets volunteer.

The group has been retraining its volunteers to combat a new, invisible assailant. White Helmets volunteers have been disinfecting schools, IDP shelters and camps as a preventative measure against the spread of the virus. They have also helped set up quarantine facilities with limited resources.

“I am worried and have anxiety now because of the possibility of our capacity being divided while we face the coronavirus and a possible Syrian regime operation at the same time,” says Ahmad Abu al-Nour, another volunteer.

One key humanitarian effort in Idlib is to raise awareness about preventative measures to contain the spread of the virus. The Turkish aid organization IHH has been going from tent to tent explaining containment measures for coronavirus. Other local NGOs have also been doing similar work. But without basic infrastructure, there is little that leaflets touting the importance of hand washing can do.

Back at the makeshift camp, Fatima Um Ali walks out of her tent and points to an empty blue plastic barrel. It’s her family’s allotment of water. A water truck is meant to come to the camp once a day to distribute water. But today the water tanker hasn’t arrived, and the barrel is empty.

“When someone has been through everything we have been through from being displaced to bombardments, do you think that a virus would make that much of a difference?” Um Ali says.

She is resigned to her fate and has decided to cling to her faith.

“I am afraid that we will get sick just like everyone else in the world,” she says.

“But I am also not afraid because in God I trust.” 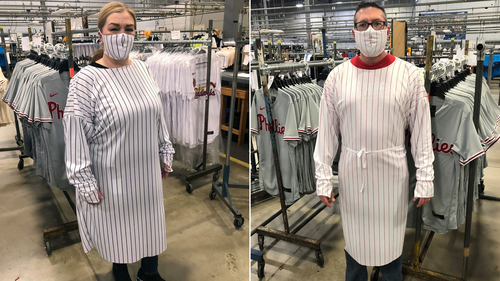