Eight teenage girls were charged with murder Tuesday in the stabbing death of a 59-year-old Toronto man in what police are calling a “swarming” attack.

The man was found stabbed Sunday shortly after 12 a.m., following a report of an assault in the area of York Street and University Avenue. The man was taken to a nearby hospital where he later died, police said. Authorities did not release the man’s name pending family notification.

The eight girls were found shortly after the attack and taken into custody and charged with second-degree murder, Detective Sgt. Terry Browne of the Toronto Police Service Homicide Unit said during a news conference Tuesday.

The group of teenagers “met each other through social media. They come from varying parts of the city,” Browne said Tuesday.

“We don’t know how or why they met on that evening and why that destination was downtown Toronto,” Browne said, adding police believe the group may have been involved in an “altercation” earlier in the evening before the stabbing.

Browne said he would not call the group of girls a “gang” but noted they participated in a behavior known as “swarming,” in which multiple attackers target a victim simultaneously. A number of weapons were also found with the girls, Browne added.

Three of the girls have had “prior contact” with police, Browne said. 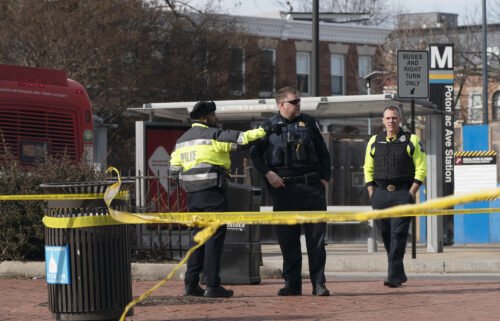