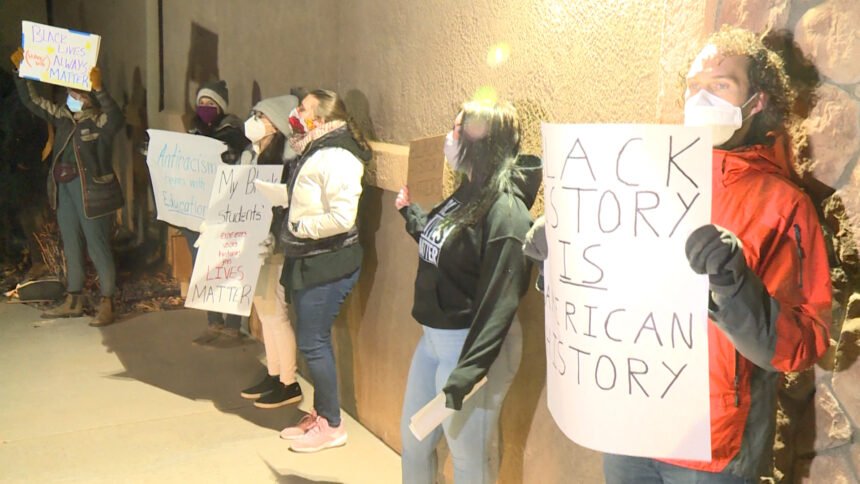 FALCON, Colo. (KRDO) -- About two dozen protestors gathered outside a District 49 meeting in support of a teacher who was reprimanded for violating district policy after showing a Black lives Matter mural to students.

Back in January, a teacher at Bennet Ranch Elementary school in Falcon showed their students a photo of a Black Lives Matter mural. It came up during a lesson about Martin Luther King and Civil Rights. The district deciding the teacher violated its policy on controversial content.

"That should not be a controversial thing to express in a school,  and if it is - there is something wrong with what the school's message is that that goes against it," says Madeline Smith who was one of the protestors. Some in attendance like Isabel Alvarado were teachers themselves.

The conversations continuing inside as well during the public comment section of the meeting. Many angry the district would consider the Black Lives Matter movement controversial. Out of the more than a dozen speakers, only one person who supported the districts action.

But district officials clarified what exactly happened, and why the teacher was reprimanded. Chief Education Officer Peter Hilts says the teacher wasn't punished because of showing the photo to students, but because they didn't follow the proper procedures.

"The teacher wasn't reprimanded for the content of the lesson, we believe that was misreported because the lesson was approved," Hilts said during the meeting.

According to D49 policy regarding "controversial topics", a teacher must get approval from the school's principal first. Then, once approved, they must notify their student's parents, which didn't happen in this case and led to an apology being sent out to parents.

A D49 spokesperson sent us the following statement:

"As part of a lesson linking Dr. Martin Luther King Jr. and the American
Civil Rights Movement with current events, an art teacher included a street
mural saying, “Black Lives Matter.” That phrase has many meanings and
associations, including some that are controversial, so we should have
followed our controversial materials policy and notified parents in
advance. We regret that oversight. Our policy and process invite feedback,
so the identification and subsequent correction honors our process, and
does not make a value judgement on the content. Although we will continue
including discussions of contemporary issues in many areas of our
curriculum, we commit to host these conversations carefully in partnership
with parents and seasoned with grace and humility. We are grateful that
parents support us and trust they will keep holding us to the highest
standard."

As for how the teacher was reprimanded, the spokesperson says that information is confidential.