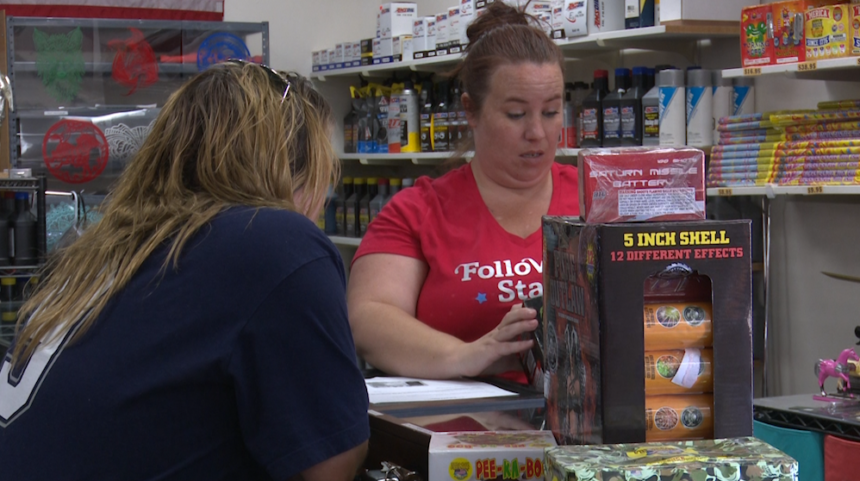 The loophole is of growing concern for Colorado Springs firefighters, who are preparing to battle any fire that sparks from illegal fireworks this fourth of July.

Affordable Flags and Fireworks on US Highway 85-87 in unincorporated El Paso County has been selling fireworks since 1994. Owner Jody Ilett is familiar with the laws surrounding the use and sale of fireworks in Colorado. Ilett believes the rules are in place to protect the community but admits they aren't perfect.

Most of the fireworks at Affordable Flags and Fireworks are covered up with white paper nowadays. Ilett isn't able to sell them to Coloradans due to the increasing wildfire concerns from dry weather conditions this year.

“During a stage 1 fire ban, we can not sell anything you have to light, including sparklers, anything that goes in the air," Ilett explained.

While she can't sell to those who live in the Centennial State, the law does still allow her to sell fireworks to out-of-state visitors.

“We can sell export fireworks to people who do not live in Colorado," Ilett said. "You have to prove that with a driver’s license and registration from another state. And then you have to sign a release saying that they are illegal in Colorado and you’re going to remove them from the state and use them properly wherever you go.”

The only fireworks Ilett can legally sell at this time are fireworks that are illegal in Colorado year-round. She tries her best to verify those she sells to will take the fireworks out of state, but she acknowledges the system is flawed.

Ilett believes there are situations where people buy fireworks claiming to be out-of-state residents but live in Colorado.

"I’m sure there are people who aren’t honest when they are purchasing fireworks," Ilett said.

It's not just the sale of illegal fireworks in Colorado to those with out-of-state- licenses and vehicle registration that are of concern. The city of Fountain, while in El Paso County, set its own fireworks rules this year.

Fountain officials are allowing some fireworks to be sold and used in the city limits. The permitted fireworks are required to be non-explosive and not intended to leave the ground. These fireworks are not allowed to contain more than 50 milligrams of explosive composition.

Permissible fireworks in Fountain this holiday season include:

Ilett believes the regulation of the sales of fireworks permitted in Fountain this holiday season is flawed too.

“The way the law works is that the tents that are currently selling are under no obligation to find out where you live," Ilett said. "The only obligation they have is to make sure you are [at least] 16 years old.”

“It is difficult. We live in a very transient community with a lot of federal workers a lot of military who get transferred in and out," Cooper explained. "So, at any one time up to 18, 19 percent of our population may actually have an out-of-state driver’s license. So that is a loophole and it’s frustrating for us.”

The Colorado Springs Fire Marshal's office is warning those trying to use the gap in firework sales oversight to their advantage.

“Regardless of where you are from, in the city, if you are caught using in possession or using fireworks then you’ll be summoned," Cooper said.

Violators of the firework ordinance in unincorporated El Paso County face a $750 fine and up to 6 months in jail. In Colorado Springs, the punishment for the possession or use of illegal fireworks is even steeper at a $2,500 fine.