MOBILE, Alabama (WALA) — A man seeking revenge for a shooting that took place less than an hour earlier kicked in the door of an apartment in Midtown and fatally shot a 74-year-old man who was the victim of mistaken identity, police said Wednesday.

Police said they want to talk to DeAngelo Demetrius Merrill, 28, about the chain of events that began on Williams Street and ended at Pathways Apartments on Florida Street. In all, two men are dead and a woman is in critical condition.

Hodge said the first shootings occurred at about 10:40 p.m. in the 500 block of Williams Street with an argument that a man named James Walters was having with his two daughters, who live at the address.

As the shouting escalated, another man police would not identify tried to intervene. That’s when the scene turned deadly. Police said Walters ran toward the other man.

“The preliminary investigation indicates Mr. Walters produced a firearm,” he said. “The other individual produced his firearm and shot Mr. Walters in what appears to be self-defense, based on the information that we have so far.”

The chief added that a grand jury would review the matter.

Police said the man fired three times. In addition to hitting Walters and causing him to stagger down the street until he fell to the ground, investigators said a 23-year-old woman at the house suffered an accidental gunshot. She is in critical condition.

Hodge said the woman’s boyfriend is Merrill, who was not at the house. But the chief said when he found out what happened, Merrill took off for Pathways Apartments on Florida Street for revenge. He kicked in a door and fired multiple shots.

“Another unintended consequence, you know, was the death of Mr. Jones, who, by all rights, was doing what most everyone does, you know, at that time of night,” he said. “He’s in his home, you know, minding his own business. And he, you know, becomes a victim, you know, of an incident that happened in another part of town.”

Back on Williams Street, Cameron Robinson said he was on his porch across the street when he saw the argument escalate out of control.

“The dude shot the daddy, probably, two or three times,” he said. “And the daddy ran off the porch down the street, laying down, blood on his face and arms. The other dude ran down the street.”

Another neighbor, who asked not to be identified, said she fears for the neighborhood.

“This is a quiet neighborhood,” she said. “Most people on the street are elderly, and we don’t be out and about whatever. We be mostly in house at night. It’s pretty quiet on the street. … It coulda probably shook a lot of us up.”

Merrill has a long string of arrests on drug, gun and theft-related charges. He served a year in jail after pleading guilty in 2019 to illegal gun possession and unlawful drug distribution.

Prosecutors sought to revoke his probation after Prichard police charged him in March with drug possession but Mobile County Circuit Judge Ben Brooks dismissed the case last month and reinstated the defendant’s probation after prosecution witnesses failed to appear for a court hearing. 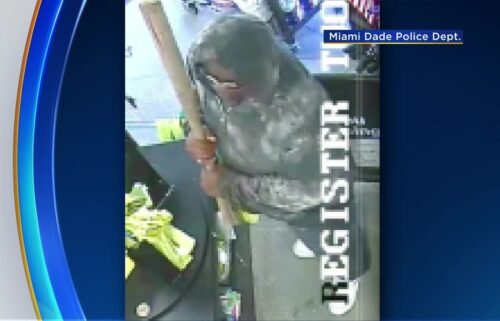